Turn your computer into a multitrack music recording studio

n-Track Software has been developing audio software since 1995, when the first version of n-Track was released. Back then it was a simple box with a few buttons that allowed to record 4 tracks. At that time multitrack recording was still done on tape. Since then n-Track has been steadily evolving in a full featured program and is now one of the most popular audio recording software on the internet.

n-Track is avaialble as trial version, so that you can freely download and test it. We sell n-Track directly from our website, the direct-selling method enables us to sell n-Track at a low price. n-Track Software is located in Rome, Italy.

# Records and plays back a virtually unlimited number of audio and MIDI tracks
# VST, VST3, DirectX (Windows), AU (Mac) and ReWire effects can be added to each channel/track
# Volume, pan, aux sends & returns and effects parameters can be automated: you can "program" fade-in/outs, cross fades, boost the volume of a track when there is a solo etc.

n-Track is available for the following plaftorms:

* Supports 16 and 24 bit single and multichannel soundcards at sampling frequencies up to 192 Khz
* Compatible with Asio, WaveRT, WDM, DirectSound and MME audio drivers, which means that n-Track can work with almost any soundcard available today with the lowest possible latency
* Multichannel soundcards or more than one soundcard are supported: you can record multiple tracks at a time and output to more than one stereo output. Each output channels has its own master channel effects and volume control

* Imports and exports .wav, .mp3, .wma, .mid, .ogg, .flac, .aiff, .cda, .sng, .sgw audio files
* Imports and exports EDL multitrack song files for exchanging songs with other multitrack programs
* Sync to other programs or external devices using SMPTE/MTC or MIDI Clock sync, acting either as master or slave
* Supports surround mixing for creating DVD audio projects using 5.1, 6.1 and 7.1 channels surround formats
* Videos (AVI, MPEG) can be played in sync with the song in a dedicated video playback window
* Once finished recording the whole song, you can mixdown all the tracks into a single wav file and to use it to record an audio CD track using a CD recorder or to distribute the song via internet using the built-in mp3 encoder 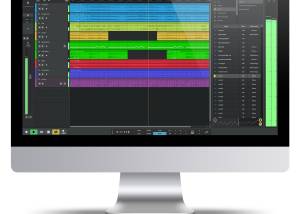 What do you think about n-Track for Mac OS X?

WavePad is a Free Audio Editor for the Mac OS. WavePad allows you to create and edit voice, music and other sound recordings. You can duplicate sections of recordings and add echo, amplification, noise reduction and other effects. The following is a list of features for ...

WavePad is music editing program for Mac OS X. WavePad allows you to create and edit voice, music and other sound recordings. You can duplicate sections of recordings and add echo, amplification, noise reduction and other effects. The following is a list of features for ...

Orinj for Mac and Linux

Get the latest downloads updates and news directly in your inbox. By clicking on "Subscribe" above, you are agreeing to the Terms of Use and the Privacy Policy.
© 2023 TopDownload.Club  |  All rights reserved.
created by FAUST